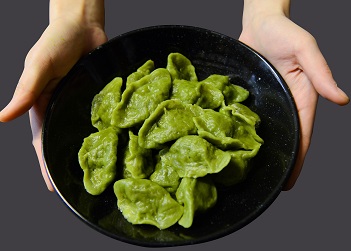 Who doesn’t love momo? Even people who say they don’t like momo love momo. They are cheap, healthy, tasty and available on almost every street corner in every metropolitan city in India. Chances are if you are in Delhi, Mumbai or Kolkata- you probably know more than 20 momo hotspots yourself. But how well do you know your favourite snack?

Momo are probably of Tibetan origin. The name “momo” is derived from the Tibetan term “mog mog”. Momo are a type of South Asian dumplings that are hugely popular throughout the region. Momo are basically dough wrapped around stuffed vegetables or meat. These can be cooked in various ways- but are most commonly steamed.

It is not clear how momo invaded India, but it probably became popular with the influx of Tibetans in India. On the other hand, momo are extremely popular in Nepal, and a theory also says that it was the Newar merchants of Kathmandu who brought the recipe from Tibet during their trades. From there, momo spread far and wide.

Originally, momo were made only from meat- more specifically- yak meat, as vegetables were scarce in the cold and rocky Himalayan regions of Tibet. But when the dish gained popularity in India, vegetable momo came into being to suit the taste of vegetarian Hindus of North India. Still, momo remain a mostly meat dish- though instead of yak meat, chicken is used as it is cheap and cooks easily.

Momo are very popular in Eastern India. West Bengal, Sikkim, Arunachal Pradesh and Assam all have their own local varieties. They are not only common street food but are often made at home. Ladakh and Dharamshala, which are home to a substantial number of people of Tibetan origin, are also well known for their variety of momo.

Momo are considered a traditional delicacy in Bhutan, Nepal, Sikkim, Assam and north Bengal. Recipes are often passed down via generations. They are often served with a hot and red chilly sauce and accompanied with clear meat soup.

Thanks to India’s love for food- and knack for adapting tasty stuff into local cuisine, you can also get seafood momo in most restaurants. These are mostly stuffed with shrimps. Similarly, you can also get paneer momo that appeals to vegetarians.

You can actually find momo filled with “chhurpi”- which is an indigenous ricotta- type cheese common in Himalayan regions. “Chhurpi” has a taste totally distinct from paneer and is softer. If you ever get a chance, check it out.

It is common knowledge that the best momo are those that are available on the street corners and small shops. While almost every Indian restaurant serves momo, you bet you can find the same – or better- taste for a smaller price at a nearby momo stall.

Momo are mostly steamed. The traditional momo steamer is called a mucktoo. It is a metal utensil with holes at the base. In many places, bamboo steamers are also used.

Momo can also be boiled in meat broth, and even fried after steaming. These fried momo are called pot-stickers or “kothey momo”.

In parts of Nepal, Sikkim and north Bengal, you can also get unfilled plain steamed dough called “tingo”. These are often shaped like a lotus for visual appeal.

Momo also has a big-brother called thaipo, which is common in Nepal, Sikkim, north Bengal and Ladakh. A thaipo is a truly fat momo- about thrice the size of an ordinary one. The outer covering is also harder than that of a traditional momo. If you polish off two thaipos, you have eaten the equivalent of a full plate of momo. Thaipos are very popular in the north-eastern states.

Momo can also be a part of thukpa or traditional Tibetan noodle and soup bowl. In many households and stalls, you can make a hearty meal of momo in meat broth with assorted vegetables.